Digital pianos can sound disappointing (thin, tinny, nasal, dull) in live settings, even if they sound great in headphones. This is often due to stereo piano samples that have mono-compatibility issues: interference between left and right channels causes distorted timbre due to phase cancellation.

I have an earlier (and even earlier) post with measurements that show this happening on my Yamaha CP50. Those measurements can be hard to interpret. For making comparisons between pianos, I’d prefer one simple measure of how bad these phase issues are. One possibility is a phase correlation meter of the kind sometimes found in DAWs and mixers. This is a quick post to share the results of running my Yamaha DP through such a meter.

In reality, a complex musical tone is a superposition of some smallish number of spectral components (harmonics) each with its own relative phase and amplitude. For these signals, negative correlation means that one of more spectral components has high amplitude and nearly 180º phase difference between channels. So negative correlation is a sign that things will sound weird when the L and R channels interfere or mix down to mono — which always happens to some degree, even in live stereo, especially with the directional loudspeakers common in live sound — because the out-of-phase spectral components cancel one another by destructive interference.

High correlation isn’t necessarily a great thing (a correlation of 1.0 means the “stereo” signals are identical, i.e. dual mono, which can sound uninteresting and lack the “spaciousness” that stereo can bring). But high negative correlation is definitely bad.

Here is the inter-channel correlation as measured for every note on my Yamaha CP50 stage piano (click image to enlarge):

This shows what a correlation meter would read while playing each single note. Each point comes from analysing the piano’s stereo output with a single note held for 1.0 sec after striking, with signals recorded directly from the piano’s line-level outputs. The correlation here is the usual normalized cross-correlation (a.k.a. correlation coefficient) of the L and R signals, with integration time 600ms. For consistency, each note was recorded sans reverb and at exactly the same strike velocity, set manually in the keyboard setup.

The notes with negative correlation, shown in red, are the “dud” notes — the ones that sound worst in live stereo or (even worse) when only the L/MONO output is used, since this electronically mixes the samples down to mono. I’ve done lots of listening tests to confirm that this analysis corresponds well to my own perception of which notes sound wrong. The notes with the most negative correlation (A#4, G#4, F5, F#5) sound obviously wrong when mixed down to mono — although they sound just fine in headphones, which eliminate wave interference effects.

But DP samples (regardless of whether they’re recorded or synthesized/modelled in software) are not like normal stereo: they’re typically close-mic’d and very dry. So inter-channel phase differences don’t encode anything like ambience or a typical “stereo image”; they’re mainly an artefact of close mic’ing in the near-field of an acoustically large instrument. So, for good mono compatibility, a DP sample should have correlation significantly greater than 0. Unfortunately my Yamaha DP fails that test on about half of its notes — including almost all of the notes in the critical two octaves above middle-C, where most melodies sit.

Presumably, the audio engineers responsible for the samples in the CP50 were using headphones and didn’t check for mono compatibility. A correlation meter reveals a problem right away.

The good news is that phase correlation gives a simple way to make objective comparisons between pianos, at least in terms of whether to expect a big difference in sound quality between headphones and live sound. This measurement corresponds closely to the sound-quality issues I’ve had with my own piano. Of course, as with any measure that boils down many complex factors down to a single number, it can’t reveal everything.

Could other pianos be this bad? I’d like to make similar measurements on lots of pianos, to build up a database of which ones perform well in this regard. If you own a DP and are willing to help, let me know… all you would need to do is make a short recording of every note on your piano; I’ll run the analysis and post it here.

I ran the same analysis on the outputs of the Pianoteq 7 STAGE piano, with out-of-the-box presets except that I disabled reverb and set the velocity curve flat, for consistency:

Results are broadly similar to the Yamaha samples. There are several (but fewer) notes with negative correlation. Note F5 is especially bad. Listening tests confirm what the analysis predicts: F5 has somewhat different timbre (and noticeably lower volume level) than the adjacent notes E5 and G5. A spectral analysis shows why: 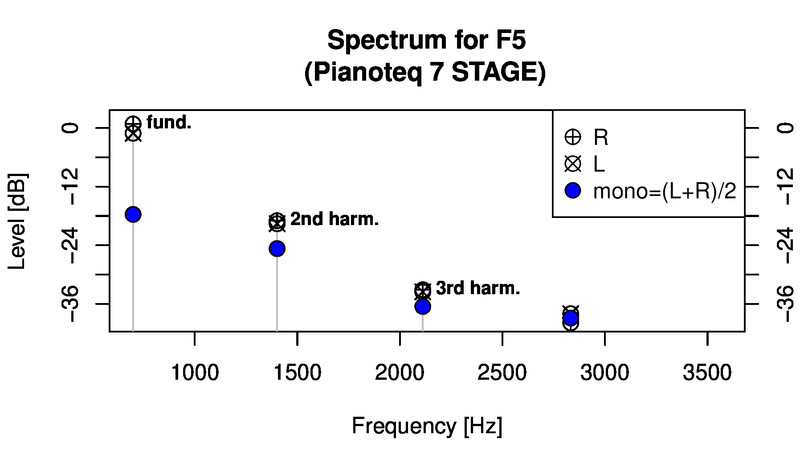 The timbre of this note (determined by the relative levels of the various harmonics) is dominated by the fundamental at 698Hz. But L and R channels are nearly out of phase at this frequency so phase cancellation causes the fundamental to drop 18dB on mix-down to mono. This would distort the timbre dramatically, except that the 2nd and 3rd harmonics drop as well so the main perceptual effect is a drop in level. This is obvious in the recorded waveforms: 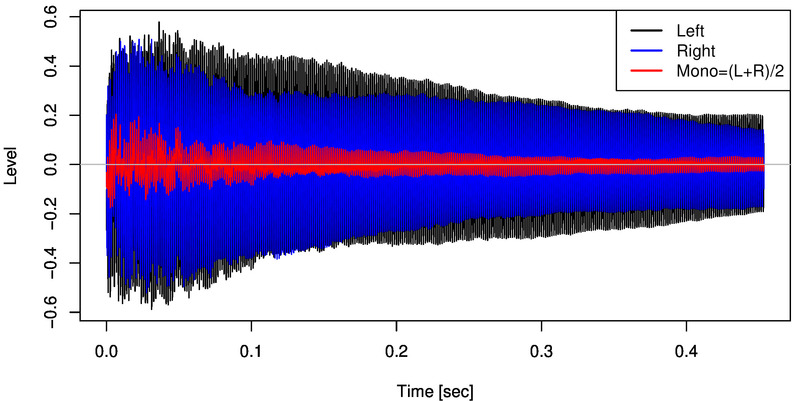 Alas, not every problem note can be identified by phase correlation alone. For note A#3 both the fundamental and 3rd harmonic drop out on mix-down to mono, causing serious harmonic distortion: 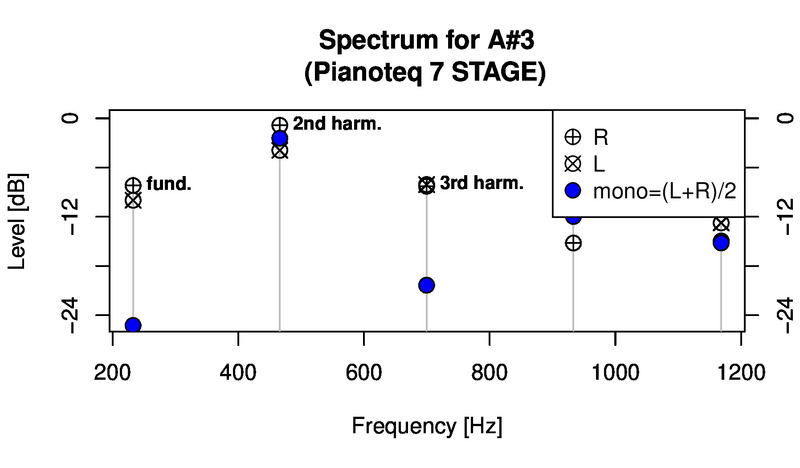 This problem doesn’t show up in the phase correlation because A#3 is dominated by an in-phase 2nd harmonic that makes the correlation value come out positive.

Perceptually, all of this is quite subtle. And, again, not an issue in headphones. Most people in most settings probably won’t hear any of this. Still, in my experience it’s the most significant reason that digital/software pianos lack realism in live settings.

Pianoteq goes to some trouble to optimize the placement of virtual mics to achieve the best compromise “flat” response, and also uses delays to compensate for differences in mic distance and thus minimize the worst phase problems. But a piano isn’t a point source, so this compensation will never be perfect. So stereo output is always going to have some phase problems that can’t be compensated/equalized.

It’s interesting that, across much of the keyboard, Pianoteq has much lower correlation than my Yamaha piano. This is especially so at the bottom end. I can only guess, but I suspect that the virtual microphones in this piano model are much further away from the instrument than in Yamaha’s sampling technique (it’s hard to know, since I used the demo Stage version of Pianoteq which doesn’t allow mic position to be changed). Or maybe the model uses decorrelating filters to achieve this. In any case, the results are pleasing — Pianoteq’s low notes are much more sonorous and “spacious” than my Yamaha, just as the low inter-channel cross-correlation would predict.