Keyboardists often complain that their digital/electronic piano sounds harsh, honky, thin, muffled, resonant, tinny, strident, boxy, like a toy/budget instrument, and other kinds of terrible and awful, such as the “ice-pick-in-the-ear effect”. I’ve been frustrated by these issues myself; no one feels inspired playing an instrument that sounds bad!

After a few years of working on understanding the causes of these problems, I’m convinced they can be solved by careful loudspeaker design, especially with attention to directivity control. It is possible to achieve a much more inspiring sound with existing keyboards. However, most off-the-shelf sound systems (e.g. “keyboard” amps, monitors and compact PAs) aren’t up to the task, for reasons described below.

Importantly, many players are happy with the sound of their piano in headphones — only their live sound causes grief. (Here “live” can mean anything from a public performance to playing by yourself at home.) The typical experience is described in comments like:

“Why do these digital pianos sound so good through headphones but kinda suck when listening through speakers?” [Busch on forums.musicplayer.com]

“I have a pair of fairly high end speakers … and the sound plus the overall playing experience is nowhere near the same compared to my $99 set of phones.” [Dave on forums.musicplayer.com]

“I [tried out] the supposedly best options in the way of keyboard amps … and was shocked and confused to find that the sound of this equipment (in the thousands of dollars) for naturalistic piano was completely unusable … Seems like people trying for naturalistic sound from dig pianos in smaller clubs sound tinny. Why should it be so hard to get acceptable sounds from a dig piano anyway, why such a discrepancy between the headphones and what’s coming through the amp??” [ziggy on gearslutz.com]

Instead, the evidence I’ve gathered (by spectral analysis of the signals at my digital piano’s outputs and acoustic measurements of several amps and PAs) points to the following causes of bad live sound:

With the exception of polyphonic interference, these causes of bad piano sound are actually made worse by the typical approach to design of sound systems for live performance. Floyd Toole summarizes the prevailing design goals (my emphasis added):

Directional control is critical in designing sound reinforcement systems, the purpose of which is to deliver sound to the audience without exciting excessive reflections and reverberation within the room itself. The challenge is to put more of the audience in a predominantly direct sound field, precisely the opposite of a live concert hall experience. [1, p.47]

These criteria are great for speech intelligibility and for performance in large venues, but they contribute to bad piano sound in at least three ways.

First, and most obviously, a piano invariably sounds too “dry” when played through an amp / PA without reverb, because the sound system provides very little in the way of room reflections and natural reverberation — quite unlike an acoustic piano. With acoustic piano we actually do want to approximate a live experience. This changes the design goal entirely, favoring relatively high levels of reverberant sound and early lateral reflections [1] — precisely the opposite of what typical keyboard amps and PAs aim to do. Adding synthetic reverb helps, but it often sounds unnatural: the human ear is pretty good at detecting the mismatch between synthetic reverb and the natural reverberation of a room.

More importantly, and unfortunately for stereo piano, a high level of direct sound presents a worst-case acoustical sum of left and right channels at the listener’s ears. This causes audible comb filtering due to inter-channel phase differences, which the room reflections and reverberation are too weak to mask. (Playing in summed-to-mono is even worse than stereo, since in this case the comb filtering is introduced at the source, preventing any masking that would otherwise be provided by room reflections.) Reverb doesn’t help here, since inter-channel phase differences at the piano’s outputs will persist even after reverb is applied.

Finally, prioritizing high output and highly directional sound favors loudspeakers that use inherently resonant elements, e.g. an under-damped woofer cabinet and/or horn-loaded tweeter. These are efficient and plenty loud but the resulting spectral problems are hardly flattering to piano sounds, tending to make them harsh or strident.

All of this suggests the need for a sound system designed along lines quite different from a typical keyboard amp / PA. The primary goal is to avoid audible comb filtering. This is most easily done by playing in mono, using only one of the keyboard’s outputs (and defeating the sum-to-mono behavior of the L-MONO jack by plugging a dummy cable into the unused output jack).

However, there are important reasons to prefer playing in stereo:

(There is a common misconception that a piano’s “stereo” outputs create a stereo image on playback. They don’t. To my knowledge, piano samples are recorded with close-mic techniques inside the piano, so inter-channel phase and level differences don’t encode meaningful spatial information. It’s better to think of the two channels as providing two different snapshots of the piano’s tone; neither is quite right on its own, but they can be usefully combined to create a more nuanced picture.)

The downside of playing in stereo is that phase cancellation (comb filtering) is inevitable where the two channels sum acoustically at the listener’s ears. Fortunately this artefact can be masked by a sufficiently high level of reverberant field [2]. Most keyboard amps / PAs are unable to do this, since they aim to avoid exciting the reverberant field. Instead, for playing in stereo we need a source that projects a relatively low level of direct sound (though not so low as to obscure articulation and timing) and excites the reverberant field to a greater degree.

As a bonus, a sound system designed for increased reverberant level will not only mask comb filtering, it will also tend increase the level of early lateral reflections. This promotes the highly pleasant perceptions of spaciousness and envelopment associated with live acoustic performances [1].

Since both direct and reverberant fields will play a significant role in perceived timbre, the loudspeaker should be equalized in terms of both power response and direct response. This favors the use of constant-directivity loudspeakers, since these radiate the same spectrum in both the direct field and power response. Of these, the most common (and easiest to implement) are omni-directional (monopole) and dipole radiators.

An omni-directional loudspeaker aims to approximate a point source (monopole) which radiates the same intensity in all directions, at all frequencies. Compared with a more directional loudspeaker, this puts more acoustic energy into the reverberant field, raising its level by several dB. Small studio monitors (the ones with a 5″ or 6″ woofer) are often fairly omni-directional, which might explain why some players have had success with these.

However, the benefits of an omni loudspeaker are only available to listeners far enough away: a listener close to the loudspeakers (e.g. the player) will still experience a high level of direct sound. The following graph shows the variation of direct level with distance for several source types that radiate the same total power (assuming a critical distance of 1m, which is fairly typical but varies with room size and sound absorbing area): 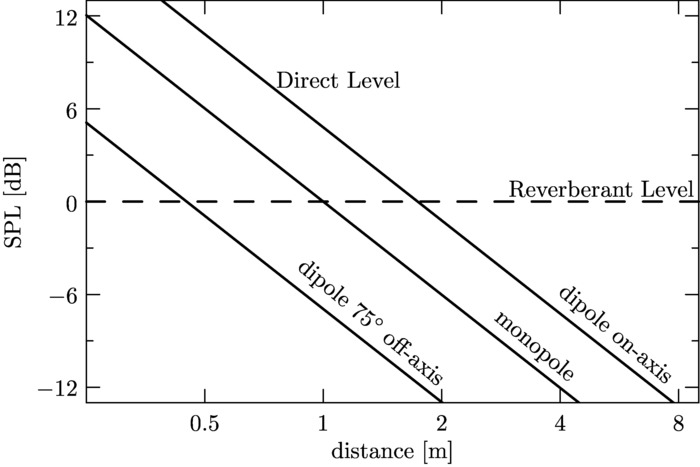 The direct level falls off at 6dB per doubling of distance. For omni loudspeakers, if we want the direct level to be at least 6dB below the reverberant field (a bare minimum to mask comb filtering) then listeners need to be at least 2m away. This could work in a room with enough space, with a layout like this: 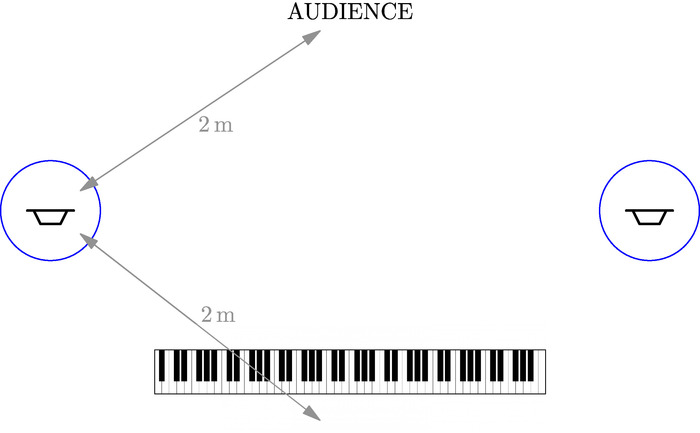 Ideally the direct-to-reverberant ratio should be adjustable, allowing for adaptation to the room acoustics and personal taste. This isn’t possible with an omni loudspeaker, but it does become possible with a dipole radiator.

To reduce the direct level below that of an omni source we need a source that directs sound primarily away from the listener (i.e. a loudspeaker with negative directivity). One way to implement this would be a pair of dipole loudspeakers (which radiate a figure-eight pattern) with the following layout. The dipole radiation pattern is shown in blue. The player is near the dipole null and so receives a low level of direct sound. The graph above indicates that at 75° off-axis, the direct sound is at least 6dB below the reverberant field even at distances less than 1m.

This setup has several advantages:

I’ve experimented with this setup using a pair of Linkwitz Lab LX521 dipole loudspeakers with my Yamaha CP50 stage piano. The results are excellent: for the first time I can play live in stereo without audible comb filtering, and the sound compares favorably to the experience in headphones. Also, as expected, even without added reverb there is a pleasant sense of spaciousness, envelopment and natural reverberation. Synthetic reverb is redundant.

Alas, dipole loudspeakers are a significant engineering challenge to design and execute, so cost becomes a significant factor (e.g. at the time of writing, components for a DIY version of the LX521 cost over $5000).

I’m convinced that a stereo pair of dipole loudspeakers is the best way to reproduce stereo piano samples in live performance. The downside of this approach is cost and complexity.

I’m working on a dipole implementation customized for this application, with the goal of making something portable and affordable.  Please let me know if this is something that interests you: sign up for my mailing list and I’ll contact you directly with updates.

22 thoughts on “Toward High-Quality Live Sound for Digital Piano”