In my quest for high-quality live reproduction of digital piano, I have often heard it said that a piano needs full-range speakers. The argument is that the lowest fundamental is at a very low 28Hz, while the percussive nature of a piano generates lots of high frequencies. This claim sounds reasonable, but some measurements and spectral analysis show it doesn’t hold up.

I mic’d a 6′ grand piano with the lid open and recorded myself playing a bit of the 2nd movement of Bach’s Italiano Concerto, which happens to cover the four octaves that most pianists play in most of the time (C2 to C6) and has a range of dynamics from piano to forte. I then broke the recording into about 600 overlapping intervals 0.5 seconds long and calculated a mean spectrum for each interval.

Overlaying all these spectra in one plot gives a good summary of the maximum output across the spectrum (kind of a flattened spectrogram). The signal is essentially limited to a band from 100Hz to 4kHz: 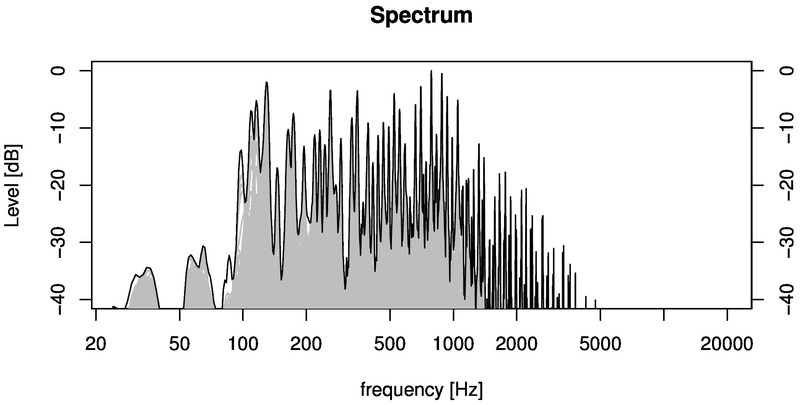 The black curve plots the peak level in each frequency bin (max. over all 600 FFT records) — like a “peak hold” applied to the spectrum for the duration of the piece.  Below about 80Hz, the level never rises above -30dB relative to the peaks in the rest of the spectrum.

The analysis changes only slightly if the piano is pushed to greater extremes. I made another, more demanding recording: a fortissimo chromatic scale slowly up the entire keyboard (0:00-0:55), then pianissimo all the way down (0:55-1:20), followed by a bunch of big full chords and octaves up and down with varying dynamics and using as much of the keyboard as I could, some loud tremolo octaves in the low bass, and some other random stuff pushing the limits of what the piano can do (and musical taste). The resulting spectral envelope looks like this: 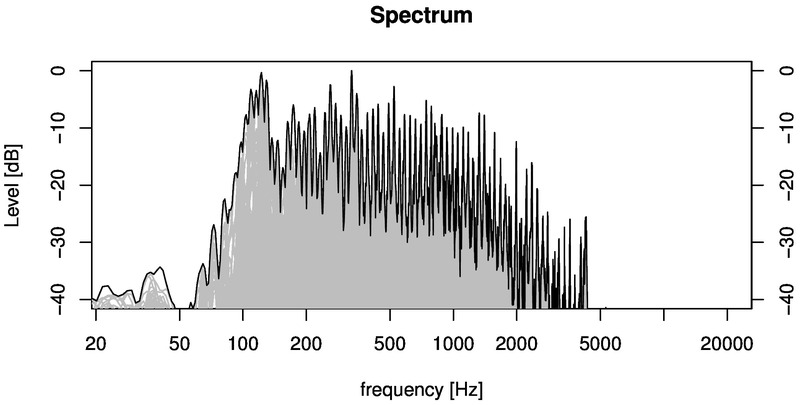 There’s some more low bass and high frequency content now, but the signal is still packed into a band from 60Hz to 5kHz. Here is the recorded signal in the time domain, together with low- and high-passed versions:

Again, below 60Hz the level is consistently 30dB down from the rest of the signal; maybe barely audible, likely not. The signal above 6kHz is utterly negligible, except in two places where I played at ff levels in the highest octave; even there, all the extra energy is below 10kHz.

But what about that 28Hz fundamental?

The note A0 does have a 28Hz fundamental, but very little energy is generated at that frequency. Actually the sound pressure is dominated by the 4th harmonic (at about 110Hz), which in my measurements is 35dB louder than the fundamental and 2nd and 3rd harmonics. Our hearing apparatus perceives the 28Hz pitch via the missing fundamental phenomenon, but the tone isn’t really present and we don’t need to reproduce it. The same is true an octave up at A1: the fundamental (at 54Hz) measures 35 dB below the 2nd harmonic.

I plan to do A/B comparisons of these recordings with headphones, with and without a 60Hz-6kHz bandpass filter, to test for audible differences…