I’ve been doing some work on determining the best toe-in angle for a dipole loudspeaker.  The mathematical details are in this draft manuscript, but here is a brief summary.

By toeing-in a dipole one can selectively attenuate various room reflections by placing them at or near a dipole null (i.e. 90° off-axis).  Shown here are two scenarios for the first lateral reflection paths in a room, with the polar response of an ideal dipole superimposed.  Only the dipole orientation changes, the reflection paths are the same in both cases: 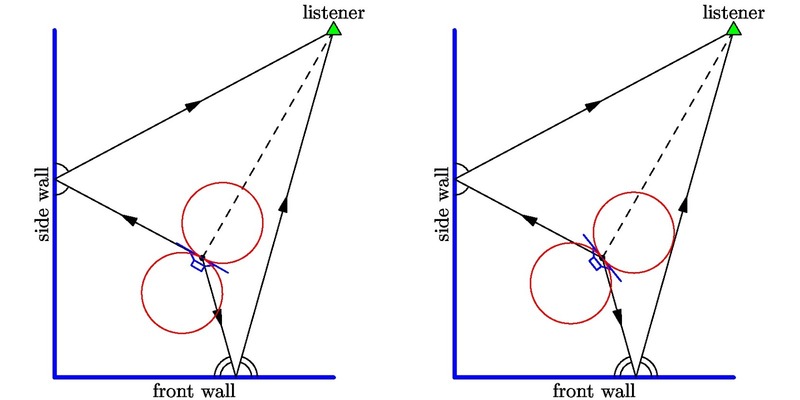 The first case is typical; the side-wall reflection is severely attenuated (about 30dB) since it is radiated near the dipole null.  The front reflection is helped a bit, but it’s only down 3dB (plus about 4dB due to path length).  In practice a mirror placed at the side wall reflection point will show an image of the loudspeaker on-edge.

In the second case the dipole is toed-in about 20°, so that side- and front-wall reflections are radiated at equal levels.  This orientation maximally attenuates both reflections, which are now radiated at 8dB below the direct sound (accounting for path lengths, the reflections arrive at the listener at -12dB).  Mirrors placed at the reflection points will show symmetric views of the rear of the loudspeaker.

I find that the toed-in orientation significantly widens the sweet spot (my wife and I can sit side by side and still be immersed in the stereo illusion).  It might be due to my room being too small to delay reflections adequately, or maybe it’s about inter-channel level differences (see below).  Linkwitz favors the first scenario, preferring to minimize only the side wall reflection while diffusing the front wall reflection.  I don’t claim to know for sure which is better, but would argue that 12dB attenuation is sufficient for the side wall, in order that the front wall reflection can be attenuated by this much as well.

The toe-in angle that equally attenuates the front- and side-wall reflections varies with loudspeaker placement, like this for an ideal dipole in a typical largish room: 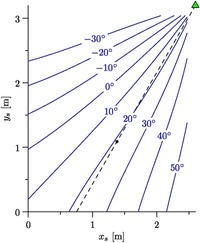 The green triangle is the (fixed) listening position; the room corner is at the origin.  The contours indicate, as a function of loudspeaker placement, the toe-in angle (relative to the listener) that will attenuate front- and side-wall reflections equally.  The dashed line is a guide, indicating speaker placements that give an equilateral arrangement of a stereo pair along the front wall, with the black dot at 8ft≈2.4m.  For an ideal dipole toed-in as in this figure, the level of the first lateral reflection (relative to the direct sound) at the listener varies with loudspeaker placement like this (including losses due to path length): 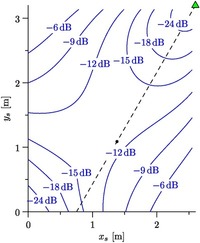 For placements close to the listener the direct sound gains 6dB per halving of distance, so we see the relative reflection level fall off at roughly this rate.  Interestingly, the reflection levels also fall off steeply for speaker placements near the room corner.  This is because corner placement allows one to put both reflections near a dipole null (with a toe-in of about 12°), like this:

Of course there are good reasons not to do this, like irregular bass response due to comb filtering.  But it’s interesting and maybe worth experimenting with.

Another advantage of dipole toe-in is that it decreases the inter-channel level difference that results when a listener is seated off-center, out of the sweet spot.  Look again at the two scenarios in the first figure above.  In the first scenario (not toed-in), when the listener moves laterally to their right (our left), i.e. closer to the loudspeaker shown, the sound level from the closer loudspeaker increases (at 6dB per halving of distance) while the level from the other loudspeaker decreases at the same rate.  When the resulting inter-channel level difference gets high enough the phantom stereo image is perceived to collapse into the closer loudspeaker.  (Inter-channel timing differences are also a major factor here, but it seems there’s nothing we can do about this.)

In the second (toed-in) scenario, as the listener moves laterally, closer to the speaker shown, they are simultaneously moving away from the dipole axis and so receive direct sound radiated at a lower level.  These competing effects on sound level negate each other: the net effect is that the sound level from one loudspeaker is roughly constant across the listening area.  With just the right toe-in, the lateral variation of inter-channel level difference can be made to go to zero, as follows. 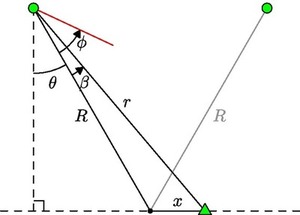 The listener (green triangle) is offset a distance x from center with respect to the loudspeakers (green circles).  The red line indicates the dipole axis, which is toed-in by an angle Φ.  If we take R=8ft≈2.4m and θ=30° (i.e. a typical equilateral arrangement) then as a function of x the inter-channel level difference looks like this, for the various toe-in angles indicated: 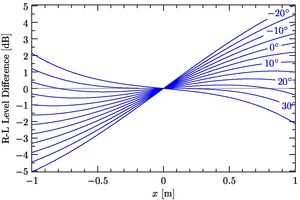 Not many (any?) loudspeakers are designed for listening at 20 to 30° off-axis.  Here we have two good reasons to consider this as a design criterion.

5 thoughts on “Optimal Toe-In Angle for a Dipole Loudspeaker”